A bizarre interview clip with Boris Johnson surfaced this week and quickly went viral. Conspiracy theorists assumed it was an attempt to deflect away from Johnson’s personal issues – but was there something else at play? Steve Maybury pays his respects to some very clever – and very modern – crisis comms management (or ORM – online reputation management).

This week Conservative leadership candidate Boris Johnson took part in an interview in which he rambled at some length about making model buses out of old wooden wine crates. It feels daft even typing it out.

The interview was part of his new strategy to ‘not hide from the media’ and it was bizarre, to say the least. In case you missed it (ICYMI, as the kids say), here’s the relevant part:

As you can imagine, it quickly went viral. It’s everything that Johnson’s haters dislike about him in a single minute-long clip: rambling, incoherent, disingenuous… yet, per the latest polls, the majority of Conservative MPs want to make him Prime Minister.

But Johnson’s supporters (and his enemies) reckon he’s a lot more calculating than his buffoonish exterior suggests – and many claimed there was a lot more going on than a bewildered 55-year-old rambling about buses.

Was he throwing a dead cat on the table?

Quotes from Johnson from 2009 surfaced once the interview had spread. In these quotes, he explains a preferred deflection tactic that he refers to as ‘throwing a dead cat on the table’ at a dinner party – the point being that whatever people were previously discussing will be forgotten because, well, there’s a dead cat on the table. 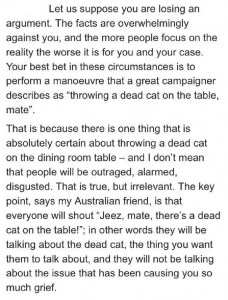 Against the backdrop of the negative coverage Johnson has been receiving, it becomes clear what his aim was here: get people to talk about something else. It worked perfectly.

Was there an SEO/ORM subtext?

However, there is another theory that has also surfaced. If you recall, Johnson had been linked with another bus-related political hot potato around the EU referendum in 2016.

In fact, prior to this week, if you typed ‘Boris Johnson Bus’ into Google, the top results all related to the disputed Vote Leave campaign claims about £350m of British money being diverted to the NHS instead of the EU.

The claims, painted on the side of a bus, have become one of the hottest talking political talking points over the last three years. (It’s a claim that Nigel Farage pointed out wasn’t accurate the day after the referendum in 2016).

Today, following his interview, all the results for the same search relate to his bizarre claimed bus-painting hobby, as follows: 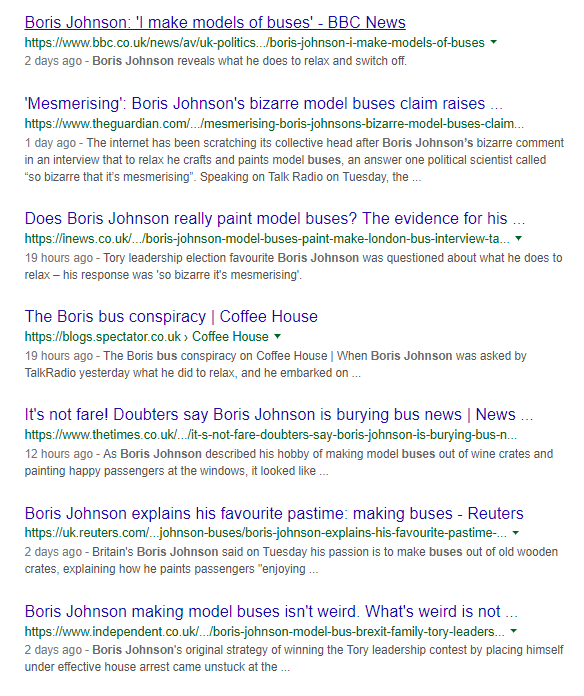 By rambling about buses, Johnson wasn’t just throwing a dead cat on the table – he was controlling the search results that people would be seeing in the future.

It’s undeniably very clever – and a sure sign of the direction in which crisis communications is heading. If you can get widespread coverage on websites with sky-high domain authority (news sites, in this case) then you can instantly change the search results that people see.

Google is so powerful and such a central part of the way we collect information. If you can control the results that people are seeing, then you can massively influence the way they make decisions – not just politically, but in terms of other lifestyle and shopping choices.

Podium offers a range of SEO and ORM services that include helping to make sure our clients’ websites rank better on Google. If your site is underperforming for your business, give us a call for a informal chat about how we can help.